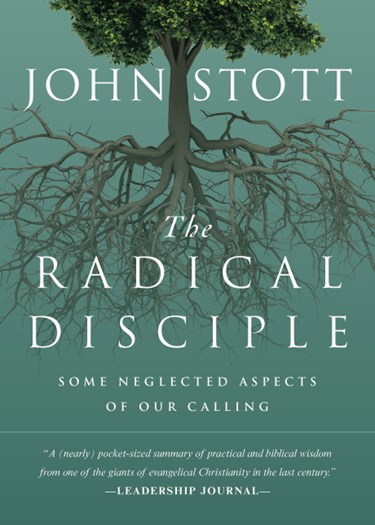 Some Neglected Aspects of Our Calling

What is a life of radical discipleship? At the root, it means we let Jesus set the agenda of our lives. We aren't selective. We don't pick and choose what is congenial and stay away from what is costly. No. He is Lord of all of life.

In the last book by the leading evangelical churchman of the twentieth century, John Stott opens up what it means to truly be a follower of Jesus. In a refreshing and accesible style, he explores eight aspects of Christian discipleship which are too often neglected and yet deserve to be taken seriously: nonconformity, Christlikeness, maturity, creation care, simplicity, balance, dependence and death.

Here, including the last public sermon he ever preached, Stott offers wisdom gained from a lifetime of consistent Christian commitment. In addition, he poignantly reflects on his last years of life and ministry.

The message is simple, classic and personal: Jesus is Lord. He calls. We follow.

"This is a (nearly) pocket-sized summary of practical and biblical wisdom from one of the giants of evangelical Christianity in the last century—one of those books that takes an hour or two to read and months to digest. Besides, who doesn't want to buy John Stott's last book?"

"While the writer's unadorned prose, threaded with biblical references, adheres to the essentials fo Christianity orthodoxy, his deep concern for the prophetic and evangelical dimensions of Christianity comes through loud and clear."

"Stott's writing is still crisp, cutting, and insightful, and his life-long love and devotion to God comes through clearly in every word of this challenging and encouraging book."

"Dr. Stott has gone to be with the Lord but he has left behind for us a rich legacy of biblical expression. Read his final words in The Radical Disciple."

"This book will be a rich inheritance for the evangelical community for decades to come."

"Considered a dean of evangelical leaders of the last half century, Stott still deserves to be heard when he speaks. He continues to be relevant in analyzing destructive philosophical and lifestyle trends. As he approaches the end of his own life, he has provoking, yet comforting thoughts regarding the deaths of believers . . . An emphatic yes for church and Bible-college libraries."

"Knowing this is Stott's final book, especially poignant are final chapters on dependence and death. Readers will reap the fruits of the author's solid grasp of Scripture and life experience. Highly recommended for anyone desiring to live an authentic Christian lifestyle."

"This slim volume is good reading, a lovely immersion into the truth of God's revelation in Scripture, full of wise words for those who find themselves on a pilgrimage through a dark world towards a City filled with divine light. The Radical Disciple is more like what I imagine he might say to a young friend who is accompanying him to the place of his retirement, and who has the chance to listen in on what Stott is most exercised to pray for when he thinks of the church he has served so faithfully for so many years. It isn't the final word, perhaps, but it's a timely one, and a word of wisdom worth heeding."

"Stott's book is not a marriage book, per se. It is a discipleship book, but most of the chapters have direct application to marriage. If we become Christlike, we will be different in our marriages. As we understand, pursue, and develop other neglected aspects of discipleship—non-conformity, maturity, simplicity, balance, and dependence—we should become better marriage partners. Stott, writing as though this is his farewell book, offers wisdom from his long pastoral experience. His transparency about his own mortality—'As I lay down my pen for the last time at the age of 88'—brought me to tears in several sections."

"Stott examines eight aspects of radical Christian discipleship. . . . Characteristically, he gives attention both to the need for personal spiritual discipline that helps the individual believer grow into the likeness of Christ and to the need for social action that gives evidence of conversion. . . . Stott left a precious gift to readers. Treasure it, and be changed by it."

Christian Mission in the Modern World

John R. W. Stott (1921–2011) has been known worldwide as a preacher, evangelist, and communicator of Scripture. For many years he served as rector of All Souls Church in London, where he carried out an effective urban pastoral ministry. A leader among evangelicals in Britain and the United States and around the world, Stott was a principal framer of the landmark Lausanne Covenant (1974).

Stott's many books have sold millions of copies around the world and in dozens of languages. His best-known work, Basic Christianity, has sold two million copies and has been translated into more than sixty languages. Other titles include The Cross of Christ, Understanding the Bible, The Contemporary Christian, Evangelical Truth, Issues Facing Christians Today, The Incomparable Christ, Why I Am a Christian, and Through the Bible Through the Year, a daily devotional. He has also written eight volumes in The Bible Speaks Today series of New Testament expositions.