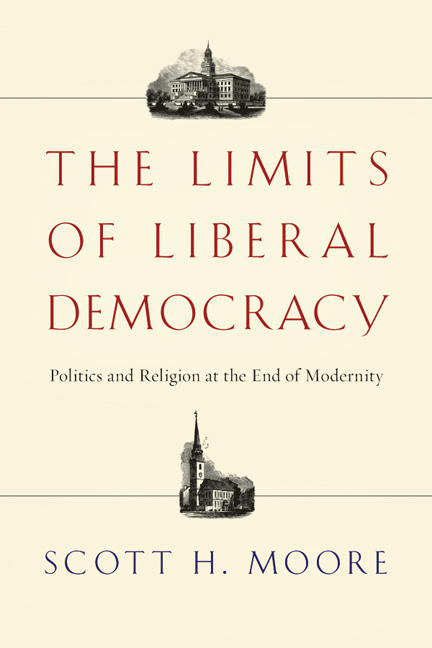 The Limits of Liberal Democracy

Politics and Religion at the End of Modernity

Exploring the question of the place of religion in the modern nation-state, Scott H. Moore observes that the easy alliance between the modern liberal democracy and Christian faith in particular is showing some serious stress fractures. He offers an incisive analysis of the ways government, operating according to the ideals of a liberal democracy, has encroached on religious freedom and how the church, of both liberal and conservative leanings, has largely acquiesced.

Moore offers a bracing critique of the limits of liberal democracy that calls for and points the way toward a more faithful engagement of Christians with public life--a participation that takes seriously the reality of the Christian church and both the private and public moral teachings of its Scriptures.

"In The Limits of Liberal Democracy, Scott Moore provides evidence of how a fresh and reinvigorated understanding of 'politics' might rise from the ashes of modernity. Through revelatory analysis of contemporary case studies, he offers an expanded understanding of politics that challenges our assumptions and provides a way into a future where the church universal might embody the 'extraordinary.'"

"Moore's insights into the political landscape inhabited by reflective Christians and his expert knowledge of theology and philosophy sustain his inspiring and surprising conclusions. The style is easy but the content powerful and worth the read."

"Most Christians in the United States have for some time assumed that being a good Christian is compatible, if not synonymous, with being a good American. This book calls that long-held assumption into question and challenges them to think about an altogether different sort of politics that cultivates the goods, not of the nation-state, but of Christian community. To the extent that Christians embrace this challenge and embody the practices of the extraordinary sort of politics that Moore proposes, they might really have something worth paying attention to in a society that has come to value democracy above all else."

"This is a timely and well-crafted book that should be read by anyone concerned with the church or U.S. politics. Neoconservatism is in disarray. Progressive liberalism is increasingly strident and reactionary. The denizens of both parties in the 'culture' wars look and sound increasingly similar. In such a climate, Moore gives us something fresh. By drawing on the work of Richard Neuhaus and Michael Baxter, he invites us into a 'new typology' that could move the church beyond the routinized categories that led to the opposition to First Thing's End of Democracy symposium and Baxter's appointment to the theology department at Notre Dame. He exposes the 'limits of liberal democracy' in the nation, the university and the church. Along the way he offers excellent insights into marriage, abortion, capital punishment, euthanasia and homosexuality, and then invites us to consider an 'extraordinary politics' grounded in hospitality where 'liberal' is a virtue of openness grounded in the good rather than a procedure to police thought. Anyone genuinely interested in a truthful relation between theology and politics must read this book."

"This is a timely and challenging exploration of political liberty and obligation viewed through the eyes of the church--at least when the church has its eyes open to the ways of the modern world. Equally at home with political philosophy as with scriptural interpretation, Moore offers a balanced yet forthright examination of how and why Christians might revisit their largely uncritical embrace of political liberalism as being good for the gospel. This is a book of value to Christians across denominational and ideological divides, and it has things to say to non-Christians interested in the intersection of Scripture, theology and contemporary political thought."

"Thank God--we now have brought together Moore?s thinking on these important issues in a way that has even more power than his previously published essays on this topic. Moore has a genius for seeing the significance of what some might think to be no more than academic squabble. This book is particularly timely because the election of Obama will tempt Christians again to confuse politics with statecraft."

"In The Limits of Liberal Democracy, Baylor philosopher Scott Moore has written an accessible Christian provocation. He proposes an extraordinary politics not reducible to statecraft that is embodied in a culture of life sustained by practices of hospitality. Moore challenges Christians to rethink the nature of politics as well as the prevailing relationship between Christianity and America. Compact and clearly written, this would be an ideal text for undergraduate courses in a variety of areas from general introductions to more specialized courses in ethics and politics."

1. Introduction: The End of Convenient Stereotypes
2. "The End of Democracy?" The First Things Symposium and Its Critics
3. American Catholics to the Rescue? Michael Baxter and the Notre Dame Theology Department
4. Rival Versions of Confessionalism: Neuhaus and Baxter
5. Gertrude Himmelfarb and the Priority of Democracy to Philosophy
6. Sapere aude! From Liberal Statecraft to Extraordinary Politics
7. Extraordinary Politics Beyond the Culture of Convenience
8. Hospitality and the Culture of Life

Scott H. Moore (PhD, Baylor University) serves as associate professor of philosophy and great texts at Baylor University in Waco, Texas. A postdoctoral research fellow at the Center for Philosophy of Religion and Department of Philosophy at the University of Notre Dame, Moore's areas of specialization include philosophy of religion, philosophical theology and hermeneutics, philosophy and literature, and Iris Murdoch. His articles have appeared in numerous scholarly journals, such as Logos, Communio, Fides et Historia, Pro Ecclesia, and Christian Scholar's Review, as well as in published titles, including Conflicting Allegiances (Brazos) and The End of Democracy? II (Spence).