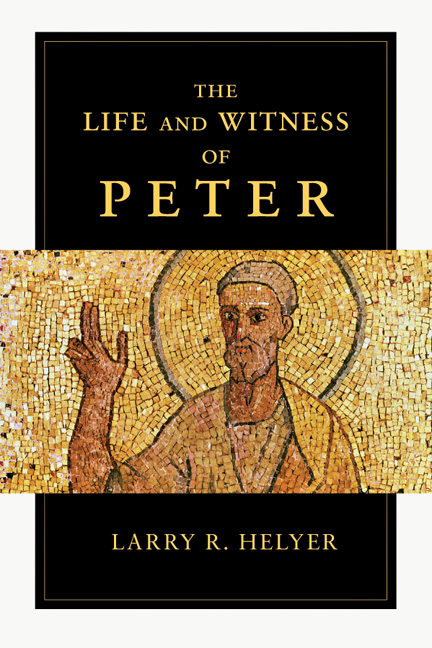 The Life and Witness of Peter

Who was Peter and what was his true stature in the early church? For Protestants at least, Peter seems caught between two caricatures: the rustic fisherman of Galilee and the author of two lesser New Testament letters. And in both cases he is overshadowed by Paul.

In The Life and Witness of Peter, Larry Helyer seeks to reinstate this neglected and underestimated apostle to his rightful stature as an early Christian leader and faithful witness to Christ.

Reconstructing Peter's life, theology and legacy from evidence in 1 and 2 Peter, the Gospels, Acts, Paul's letters, and texts from the early church, Helyer renders a great service for students of the New Testament. We are introduced to Peter the eyewitness who stands behind much of Mark's Gospel, Peter the preacher who lends deep credibility to the account of Acts, and Peter the letter-writer whose words glow with spiritual intelligence. Along the way we are rewarded with a careful analysis of prominent theological themes in Peter's letters. And we learn much about the traditions, legends and legacy of Peter in the post-apostolic era

"Larry Helyer's thorough survey of Peter as disciple, church leader and pastoral theologian offers fresh perspective on many familiar New Testament passages. It also serves as a reliable guide into some of the less known territory found in the Petrine epistles. Helyer's faithful Bible exposition is enhanced by his knowledge of ancient Jewish, Greco-Roman and early Christian literature. He has produced a study that is both informative and rich in practical application."

"Seasoned biblical scholar Larry Helyer has produced a wide-ranging, synthetic and theologically rich exploration of Petrine themes in the New Testament and the early church. Written from a standpoint of faith and commitment, and with a clear desire to hear the texts, this book is at once informative and edifying."

"Larry Helyer's book on the life and theology of Peter fills a recognized gap in scholarship. Under one cover we are treated to the story of Peter in the New Testament and accounts about Peter in postcanonical documents. In addition, Helyer's study of the theology of Peter is both scholarly and accessible to readers, showing that he is concerned about the message of Peter for today's reader. Helyer's scholarship, fairness and devotion to the message of Peter all shine through in this volume."

"We have long needed a full treatment of Peter in the Gospels, Acts and in 1 and 2 Peter that includes a look at his theology and issues of introduction. The Life and Witness of Peter fills that need very nicely. Read and learn much about this key disciple and his contribution to the church."

"This book fills a neglected area of study in NT theology. . . . The Life and Witness of Peter is one of a number of recent publications on the apostle and his epistles and helps to demonstrate a renewed interest in the Petrine writings, particularly in regard to ecumenical studies. The style of writing is simple and accessible to lay people and students in biblical studies. . . . This book has the advantage of bringing together all references to Peter in the NT. The author's commanding knowledge of intertestamental literature, as presented in Exploring Jewish Literature of the Second Temple Period, also helps to set the context of first-century Christianity and challenging passages in the Petrine epistles."

"Perhaps the primary significance of Helyer's work is the role it plays in the contemporary renewal of interest in the person and theology of Peter, the Rock."

"The Life and Witness of Peter would be one of the first books I would recommend for students, pastors, and others interested in the life and legacy of the Apostle Peter. It is thoroughly readable, refreshingly conservative, and written by a brother whose interpretive posture has been benefited by the word he is handling. . . . Helyer is clearly a most able scholar and teacher, and while this book is accessible to all, it does not avoid the tough questions. He manages throughout the book to simply, but not simplistically, explain and suggest sensible solutions to the whole range of complex issues that surround the topics under discussion in the Gospels, Acts, Epistles, and Petrine Epistles most specifically. As an introduction to Peter, it is deceptively perceptive and will enrich students and scholars alike."

"Written out of the IVP Academic stable, you expect this to be a scholarly work and it does not disappoint. . . . Like a famous painting which you think you know well, this is a book which forces you to go back to the original picture and see for yourself. It's not easy to make an overly academic treatment flow well on the page. Our author pulls it off in a masterly way. But you must be the judge of that."

"For many lay readers as well as ministers who desire to immerse themselves in an evangelical canonical reading of the apostle Peter, Helyer's offering will be a 'just right' introduction to that fascinating figure."

"Helyer adeptly navigates the text to glean insights on the most significant themes and ideas, while his awareness of the exegetical alternatives is apparent, and he is genuinely charitable toward dissenting opinions. Those who share the author's presuppositions will likely find a great deal of useful and edifying material concerning Peter's theology, and this is precisely where the book's greatest strength lies."

Abbreviations
Preface
1. Background of Simon Peter
2. Peter in the Gospels: Part One: Call to Confession
3. Peter in the Gospels: Part Two: Transfiguration to Resurrection
4. Peter and the Early Church: The Book of Acts
5. Peter in Paul's Letters
6. 1 Peter: Encyclical to Exiles
7. Peter's Christology
8. Christ and the Spirits, Christ and the Holy Spirit
9. Suffering for Jesus
10. The People of God
11. 2 Peter: Introductory Questions
12. Theological Themes in 2 Peter
13. The Character and Destiny of the False Teachers
14. Eschatology of 2 Peter
15. The Rest of the Story: Tradition
16. The Rest of the Story: Legends About Peter
17. The Rest of the Story: Peter?s Legacy
Name Index
Subject Index
Scripture Index

The Witness of Jesus, Paul and John

Larry R. Helyer was professor of biblical studies at Taylor University in Upland, Indiana, for twenty-nine years. Now retired, he continues to write on theological topics and serve as an adjunct professor in the United States and abroad. He is the author of Exploring Jewish Literature of the Second Temple Period.