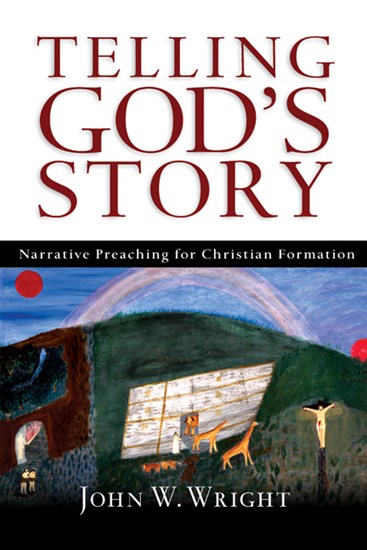 John W. Wright presents a new model of preaching that aims to connect the biblical text with a congregation so that they are formed into a true Christian community. Such formation calls for interpretative engagement with both the biblical narrative and the cultural narrative that shapes our society. Wright critically surveys current theories of preaching and the variety of hermeneutical practices, providing clear guidance and practical direction for faithful preaching.

"The church should be worried about this book. It comes as an invitation to rethink the task of preaching, but three pages into it you'll realize that Wright is not giving us another 'how-to' book for adding to the plethora of 'messages' delivered every Sunday. No, this little book is packed with minor-prophet-like punch, arguing that preaching is the practice by which the North American church has fallen, but also gives us a glimpse of how preaching could help it stand. Providing a brilliant historical and theological diagnosis of the problem with so-called biblically based, need-centered preaching (whether liberal or conservative), Telling God's Story winsomely sketches what authentic 'biblical' preaching looks like: not conscripting the Bible to legitimate the cultural narratives of consumerist individualism or triumphant nationalism, but rather finding ourselves in the biblical story as an alternative to both. If the church is properly said to be a polis, then this book unpacks the 'politics' of homiletics. It should be required reading in seminaries across North America. And we could hope that pastors already immersed in ministry would be willing to risk reading this book. But be forewarned: it will radically change your understanding of your charge to 'preach the gospel.'"

"If you think preaching should focus on getting individuals to heaven and guiding America (back) to greatness, then do not read this book. If you think that Christians make the church and that its purpose is to help them, then run away from this book. For here John Wright proclaims the biblical gospel that God intends the church 'as the visible body of Christ in the world.' Setting the biblical story over against cultural stories that have falsified the gospel and emaciated preaching, Wright calls for a homiletic reformation that preaches the congregation into the biblical story. Wright is right about what is wrong with our preaching and our churches, and his corrective guidance in this book is the cure we need. Attentive to rhetoric, filled with pastoral insight and sermonic exemplifications, this book is essential assistance in becoming 'the rhetorical embodiment of the biblical story'--that is, the church."

"John Wright very clearly exposes both the prevalence and dangers of the split between 'personal salvation' and 'mission of the nation-state' preaching in North American culture and calls us instead to the kind of preaching that will immerse our listeners in God's larger story. His many helpful insights into such topics as a 'homiletic of turning,' comedic versus tragic moves, therapeutic and managerial functions, and elements of congregational contexts will positively affect your preaching and pastoral care. This is a significantly constructive book!"

"Challenging some of the most determinative conceits represented by contemporary American homiletical practices, Wright provides an alternative account of preaching by helping us reclaim a tragic dimension internal to our lives as Christians. Deeply erudite, Wright draws on the work of Hans Frei and George Lindbeck to develop an account of preaching in which the church becomes the subject as well as the agent through which Christians learn again to have their lives narrated by the gospel.

One of the most surprising aspects of this extraordinary book is its ability to help us recognize that current forms of sermon practices can be traced to the Puritan attempt to move the individual from sin to salvation in such a way that it provided reassurance of what it meant to live in God's elect nation. As a result, Wright traces the current accommodated character of American preaching to what people oftentimes associate with a conservative religious movement. This analysis alone makes this an important book, but even more significant Wright provides a constructive alternative to such accommodated forms of preaching by providing us with examples that can shape an alternative imagination."

"Out of his own rich experience as a scholar and preacher, John Wright summons us to 'reinvent' preaching through a rhetoric that draws us out of the comfort zone of a cultural narrative where the biblical text dissolves into a happy ending and, instead, places us into the biblical narrative where we are taken up and transformed by God's story. In clear and compelling language that often rises to eloquence, this book exposes the subtle but almost sinister shift in North American Christianity by which the horizon of contemporary world culture has displaced and replaced the biblical horizon of God's narrative of creation and redemption by a fusion of individual piety and national religion. Authentic preaching then seeks to renarrate a world that makes truth relevant to its own existence by forming a Christian community--the church--that finds its life within God's narrative. Such preaching draws the church out of the world in order to place it back within the world to live out God's narrative of salvation, justice and hope. I wish that I had read this book forty years ago when I began my own preaching ministry!"

"This book has whetted my historical curiosity. It has confirmed my commitment to expository preaching of the whole counsel of God built not on a theological system but on an understanding of the text of Scripture itself. It has also given some valuable models to help make me a more effective preacher."

"The author takes a look at the western style of preaching through historical, cultural and theological lenses and demonstrates how our way of 'doing' church contradicts the biblical model. . . . Pastors and evangelists will find this book helpful for making midcourse adjustments to their styles. Seminary students also will find it a vital tool for shaping their emerging approaches to homiletics."

The Epic of Eden

John W. Wright (Ph.D., University of Notre Dame) is Professor of Theology and Christian Scripture at Point Loma Nazarene University in San Diego, California. He is the author of Conflicting Allegiances: The Church-Based University in a Liberal Democratic Society and And Then There Was One: A Search for the True Disciple in the Gospel of Mark. He is a coeditor of Priests, Prophets and Scribes: Essays on the Formation and Heritage of Second Temple Judaism in Honor of Joseph Blenkinsopp.