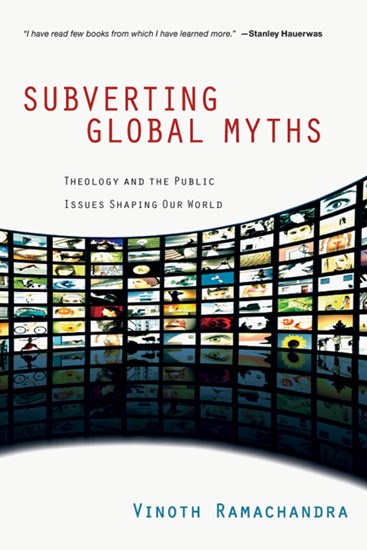 Theology and the Public Issues Shaping Our World

It is a myth that only the uninformed masses believe in myths and that power brokers, media moguls, leading scientists, financial tycoons, political luminaries and intellectual elites don't. The myths that the ruling classes believe may be more sophisticated, but they are myths nonetheless.

These public, large-scale narratives engage our imaginations and shape the way we experience the world. They are the stories that tell us what is important to know and how to live.

Subverting Global Myths takes up six areas of contemporary global discourse--terrorism, religious violence, human rights, multiculturalism, science and postcolonialism. Here powerful myths energize and mobilize considerable public funding as well as academic production. This book is not addressed primarily to theological specialists, but to all thoughtful readers who are concerned about the public issues that shape our increasingly interconnected and interdependent world.

Vinoth Ramachandra draws at length on his own experience working among university students and professors against a backdrop of militant religious and secular ideologies in Sri Lanka, a country that has suffered from "terrorism" and a "war on terror" that has claimed over sixty thousand lives since the late 1970s and shows no signs of abating. Reflected as well is his experience of living and traveling extensively not only in the West but in several of the trouble spots of Asia today.

Thoughtful critical readers who care to explore reality rather than flip from one reality show to another will appreciate this invitation to subvert present reality in order to make way for another.

"A very brave and timely screening of our modern myth-making era. Reading it is not your expected apologetic myth-debunking exercise, but rather an engaging interdisciplinary participation in exploring and exploding powerful modern myths in the secular and religious mine fields of both the right and the left. With analytical precision and prophetic boldness, Ramachandra challenges progressive elites, the politically powerful, scientific communities and religious leaders everywhere to a thorough reexamination of false beliefs and faulty practices. His stellar commitments and penetrating convictions provide a much-needed ethical corrective, calling all of us to critical discernment, moral accountability, ideologically nontainted truth telling and renewal of credibility. A must-read for any thinking Christian and their skeptical friends!"

"This is a provocative and powerful piece of work, jolting us from the comfort of our ideological slumber, compelling us to critically reflect on unexamined beliefs of the age. It reads like The Clash of Civilizations from the reverse perspective. Carl Sandburg's imagery of 'the hammer' slashing old gods and emerging idols would best capture Ramachandra's prophetic force."

"Insightful in his analysis and incisive in his argument, Vinoth Ramachandra exposes the clay feet of six of the most formidable idols in the pantheon of our globalized world. Anyone interested in some of the most fundamental themes shaping public discourse today should read this book."

Robert Schreiter, author of The New Catholicity: Theology Between the Global and the Local

"Drawing on an extraordinary range of sources, Ramachandra exposes the idolatry often masked in so much of the current discourse on globalization. This is a learned and wise book written with a theological sensibility that hopefully will be read not only by those identified as Christians but also by many others. I have read few books from which I have learned more. I really hope this book will have the impact it deserves."

"Ramachandra offers us a subversive book. If you prefer not to be provoked and challenged, do not read it. Based on solid biblical and theological ground, and on a meticulous and careful reading of cultural trends, this Sri Lankan theologian helps us to identify the global myths that hold us captive and look at them from a critical Christian perspective. With this book Ramachandra sets himself as a great Christian apologist for our time."

"Ramachandra moves competently through an extensive list of works in philosophy, theology, science and social commentary as he challenges the widespread practice of relegating global studies and contextual theology to the mission departments of theological schools. Reading this book can become a first step toward changing that."

"The author of this fresh, well researched, and beautifully written book is a lay Sri Lankan theologian. Do we need to know that? Well, yes, we do, because the decisive difference it makes is in terms of perspective--for example on Islam, on Buddhism, on colonialism, and, even more decisively, on post-colonialism. "Rather than subverting global myths, Ramachandra challenges liberal pieties. He takes issue with Western critics of Christianity such as Richard Dawkins, and with Third World émigrés who sneer at Christianity from their Western university chairs. Formidably well read and well informed, Ramachandra looks at six key areas--terrorism, religious violence, human rights, multiculturalism, science and technology, and post-colonialism. In each, he reviews the case against Christianity, and shows, with a good deal of humour, that it simply does not stand up. "Towards the end of the book he notes that Christianity is now a 'global hermeneutical community,' in which the majority of Christians live in the South. Thank heavens for that. For years we have heard that voice only through liberation theology, or through theologians attempting local theologies of one kind or another. Ramachandra?s take is different. He has read as much Western philosophy and social science as any Westerner, if not more; he takes for granted the universal nature of the Church; but his perspective is unmistakeably different. "It is this that accounts for the freshness of voice. If you come from Sri Lanka, your view of Islam is not dictated by 9/11 and all that has followed, nor by Huntingdon and his cronies, nor by scurrilously badly misinformed ideas about the Crusades, but by a quite different history. His account of current Islamic militancy is--while based on scholarship with which many of us will be familiar--profoundly illuminating. "When discussing religious violence, he turns to Sri Lanka and to Indonesia, where we end up with a very different account of that issue from that which derives from the Enlightenment and its reaction to the European 'wars of religion.' "His discussion of multi-culturalism is rich and nuanced, and among the most helpful I have come across--perhaps a reflection of a kind of plural culture different from that with which we are coming to terms in Europe. Post-colonial himself, he is immune to the guilt-tripping of much post-colonial theory, and deeply critical of the industry, as he is also of colonialism and its impact. "Throughout, he commends a Christianity that is radical precisely because it is 'orthodox.' No 'poor little talkative Christianity' here, but a profound engagement with what furthers our humanity, which finds the most helpful responses in the story of cross and resurrection. "If you are depressed by Lambeth, and by the constant sniping of the secular critics, this book is a tonic. An educative, stimulating, and faith-affirming read."

"Schooled in the reigning philosophies of both the East and the West, Ramachandra provides an intellectual handle on and qualified assessment of global issues facing the world."

"I dare say that this will be one of the most significant books you will have read in recent years. Ramachandra is a Sri Lankan who earned his Ph.D. in nuclear engineering from the University of London. He is also a teacher, human rights advocate, and a fine lay-theologian. One would be hard-pressed to find a more objective and wise observer of the global landscape from a thorough-going Christian perspective."

"This is a book that will complicate your thinking, as all useful books should. You may not always agree with his analysis but you will be educated and challenged."

"I must admit, I didn't see this book coming. I didn't think I would see the sensibility and theological passion of Lewis and Chesterton combined with the rigorous (what some would consider edgy) cultural critiques of Chomsky and Zinn alongside the international and global perspectives of a Newbigin--all from a Sri Lankan nuclear physicist. The book is riveting from front to back; the content is rich, finely articulated, and well researched. We should pay it mind for its Christian prophetic import and its integrity in reminding the reader that faithfulness and hope must always be wed to the prophetic word."

3. Myths of Human Rights
The Language of Rights
Questioning the Standard Liberal Story
Toward an Alternative Story
Individual Rights
Relationality and Rights
Legislating for Rights
Recovering a Tradition