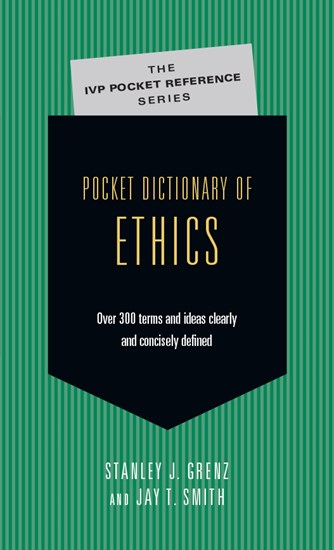 But few of us arrive in our first ethics class--or take our seat on an ethics committee--with a grip on the range of ideas and thinkers, perspectives and pitfalls that make up this ancient conversation about what is good and right and moral. We may feel like college math students who slipped through high school without learning algebra.

The Pocket Dictionary of Ethics is a convenient boost to help you catch up.

Among the 300 definitions provided by Stanley J. Grenz and Jay T. Smith are

Not only does this brief and convenient reference book take you where your desktop dictionary was not designed to go, it doubles as your basic A-to-Z survey or refresher course in ethics.

This book is also available as a mobile app from Laridian.

The Ethical Vision of the Bible 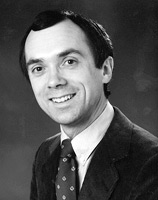 Ordained into the gospel ministry in 1976, Grenz worked within the local church context as a youth director and assistant pastor (Northwest Baptist Church, Denver), pastor (Rowandale Baptist Church, Winnipeg), and interim pastor. In addition he preached and lectured in numerous churches, colleges, universities and seminaries in North America, Europe, Africa, Australia, and Asia.

Grenz wrote or cowrote twenty-five books, the most recent of which is Rediscovering the Triune God: The Trinity in Contemporary Theology (2004). His other books include The Social God and the Relational Self: A Trinitarian Theology of the Imago Dei, Beyond Foundationalism: Shaping Theology in a Postmodern Context (with John R. Franke), The Moral Quest: Foundations of Christian Ethics, A Primer on Postmodernism, Women in the Church: A Biblical Theology of Women in Ministry (with Denise Muir Kjesbo), Revisioning Evangelical Theology: A Fresh Agenda for the 21st Century, and The Millennial Maze: Sorting Out Evangelical Options. He has also coauthored several shorter reference and introductory books for IVP, including Who Needs Theology? An Invitation to the Study of God (with Roger E. Olson), Pocket Dictionary of Ethics (with Jay T. Smith), and Pocket Dictionary of Theological Terms (with David Guretzki and Cherith Fee Nordling). He contributed articles to more than two dozen other volumes, and has had published more than one hundred essays and eighty book reviews. These have appeared in journals such as Christianity Today, The Christian Century, Christian Scholar's Review, Theology Today, and the Journal of Ecumenical Studies.