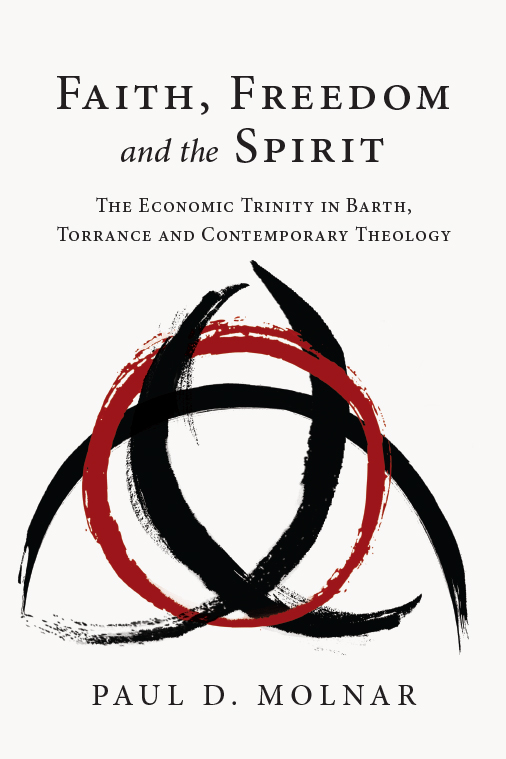 The Economic Trinity in Barth, Torrance and Contemporary Theology

Distinguished scholar Paul Molnar adds to his previous work, Divine Freedom and the Doctrine of the Immanent Trinity, to help us think more accurately about the economic Trinity, about divine and human interaction in the sphere of faith and knowledge within history. Exploring why it is imperative to begin and end theology from within faith, Molnar relies on the thinking of Karl Barth and of Thomas F. Torrance in dialogue with other contemporary theologians (Catholic and Protestant) about divine and human freedom.

Powerfully argued and meticulously documented, Molnar's magisterial study begins with an extensive discussion of the role of faith in knowing God and in relating to God in and through his incarnate Word and thus through the Holy Spirit. From there he proceeds to consider the divine freedom once again as the basis for true human freedom, discussing how and why a properly functioning pneumatology will lead to an appropriately theological understanding of God?s actions within the economy. He considers perils of embracing a historicized Christology, proposing an alternative way of understanding the connection between time and eternity that is christologically focused and pneumatologically informed. And finally, he discusses at length how the doctrine of justification by faith relates to living the Christian life in the power of the Holy Spirit and the economy of grace.

"What does it mean to say that we are given to know the triune God through his actions in history? Paul Molnar is one of the most stimulating writers on this question in contemporary theology. Well-known for his insistence that the doctrine of the immanent Trinity remains crucial for a Christian depiction of divine freedom, here he addresses the related theme: What should a doctrine of the economic Trinity say? In dialogue with major figures in modern theology, Molnar offers a rich and highly perceptive account of what the revelation of the eternal God in time does—and does not—entail."

"I consider Professor Paul Molnar to be the most outstanding Roman Catholic theologian in North America today. Erudite, perceptive and staunchly trinitarian, Molnar writes with a passion for the gospel and the truth revealed in and through Jesus Christ. His new book is a tour de force. It is really a sequel to his earlier and celebrated work on the Trinity, Divine Freedom and the Doctrine of the Immanent Trinity. The first book critiqued the many foibles of modern economic trinitarianism and urged us to think about the immanent Trinity based on God?s trinitarian self-revelation rather than human experience of relationality. In this new book, Molnar's concern is the economic Trinity, rightly understood via a 'properly conceived pneumatology' developed in dialogue with Karl Barth, Thomas F. Torrance and contemporary theology—note the addition of T. F. Torrance as a significant influence on Molnar's thinking. Molnar perceptively points to the appropriate way to think about human freedom and the role of faith in knowing the triune God and in living the Christian life. This is a crucial and sparkling work for everyone concerned about the future of trinitarian theology!"

"Paul Molnar is one of the outstanding theologians of his generation. Everything he writes is worthy of the most careful attention. In this new book he not only offers trenchant criticisms of his opponents, but also sets forth Barth and Torrance in continuity with historic Nicene orthodoxy, especially as seen in Athanasius, Cyril and Aquinas. Powerfully argued and meticulously documented, this book is a magisterial interpretation of Barth and Torrance on the Trinity in relation to election and the incarnation."

"Few Protestant, let alone Catholic, interpreters of Karl Barth read him with as much skill and conviction as does Paul Molnar. Here again we find him making important and timely interventions not only in Barth studies, but also in theology in general, challenging the present dominance of a 'historicized Christology.' Molnar shows the deep difficulties such a Christology generates, and how Barth is not their ally. He then situates the Barth-Torrance position within the contemporary theological landscape defending its viability admirably. The result is compelling and deserves the attention of evangelical, Protestant and Catholic theologians."

"The best studies of Karl Barth have moved well beyond mere exegesis of his text and now probe the fundamental assumptions on which exegetical perspectives have been based. The interrelation of election and the Trinity has become a flashpoint in contemporary discussion. A main issue is whether and to what extent obedience and subordination may be read back into the immanent Trinity. Paul Molnar explores this by way of a close comparison of T. F. Torrance and Karl Barth. This is a demanding book which sets out technical issues helpfully and with great clarity."

"Molnar's Faith, Freedom and the Spirit provides an excellent summary of the current state of the debate of the doctrine of the Trinity and a compelling proposal for how one might faithfully answer these challenges. It is a volume that seminarians, graduate students, and academics would do well to consider thoughtfully."

"Molnar's argumentation is clear, perspicacious, and spirited. . . . For any scholar interested in the thought of Karl Barth or the theology of the Trinity, Molnar's work deserves careful consideration."

Preface
Acknowledgments
Abbreviations
1. Thinking About God Within Faith: The Role of the Holy Spirit
2. The Role of the Holy Spirit in Knowing the Triune God
3. Considering God?s Freedom Once Again
4. Origenism, Election, and Time and Eternity
5. The Perils of Embracing a "Historicized Christology"
6. Can Jesus? Divinity Be Recognized as "Definitive, Authentic and Essential" If It Is Grounded in Election? Just How Far Did the Later Barth Historicize Christology?
7. The Obedience of the Son in the Theology of Karl Barth and of Thomas F. Torrance
8. A Theology of Grace: Living in and from the Holy Spirit
Conclusion

Paul D. Molnar (PhD, Fordham University) is professor of systematic theology at St. John's University in Queens, New York. He is the author of Incarnation and Resurrection, Divine Freedom and the Doctrine of the Immanent Trinity, Karl Barth and the Theology of the Lord's Supper and Thomas F. Torrance: Theologian of the Trinity, and has been published in numerous journals including the Scottish Journal of Theology, International Journal of Systematic Theology, and Modern Theology. Molnar is general editor of the Peter Lang Series: Issues in Systematic Theology, editor of the Karl Barth Society of North America Newsletter, membership secretary of the Barth Society, and a current board member of the Thomas F. Torrance Theological Fellowship. He has also served as consulting editor for The Dictionary of Historical Theology and the Scottish Journal of Theology.