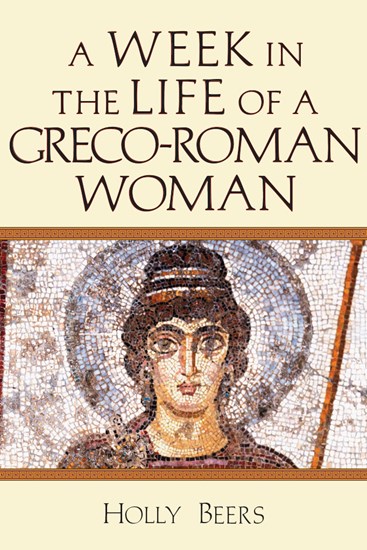 In first-century Ephesus, life is not easy for women.

A young wife meets her daily struggles with equanimity and courage. She holds poverty and hunger at bay, fights to keep her child healthy and strong, and navigates the unpredictability of her husband's temperament. But into the midst of her daily fears and worries, a new hope appears: a teaching that challenges her society's most basic assumption. What is this new teaching? And what will it demand of her?

In this gripping novel, Holly Beers introduces us to the first-century setting where the apostle Paul first proclaimed the gospel. Illuminated by historical images and explanatory sidebars, this lively story not only shows us the rich tapestry of life in a thriving Greco-Roman city, it also foregrounds the interior life of one courageous woman—and the radical new freedom the gospel promised her.

"Trying to imagine what life would have been like in the Roman empire can be hard enough, it can be harder too if you are trying to imagine what life was like for women, whose voices are mostly muted and marginalized in the annals of history. So it is quite rewarding to have someone like Dr. Holly Beers do the hard work of research and creative storytelling to help us imagine the life of women in the Greco-Roman world. Anyone interested in New Testament background or Roman antiquity will find here an enthralling and informative narrative about the prominence and plight of women in the ancient world."

"Holly Beers spins a mesmerizing tale that weaves the historical reality of first-century Ephesus—fishing, family life, childbirth, Artemis—with the universal human need for love and purpose. From the opening pages, I could not put down her story. Beers takes her extensive knowledge of the New Testament and shapes a fictional woman's journey of discovery of the gospel and the early church community. The fast-paced narrative is filled with dialogue as biblical characters—Paul, Priscilla, Timothy, and others—come to life under Beers's skilled storytelling. This is a must-read for men and women of all ages who want a fresh look at the power and promise of the gospel."

"In a story that simultaneously captivates the imagination and reflects a great deal of historical and socio-cultural research, the daily concerns and plight of a first-century Greco-Roman woman come to life in the fictional Ephesian Anthia. This week-long snapshot of a life offers a truly intersectional approach to a woman's experience, which allows the reader to get an informed feel for how gender, economic status, cultural customs, gynecological health, technology, family structures, and religious practices might coalesce. Re-embedding Paul's proclamation of Christ within this fictional—but potentially realistic and certainly based on careful research—context enables modern readers to hear anew both the scandal and the hope that the gospel must have held for its earliest hearers."

"Holly Beers masterfully transports her readers into the bustling port city of Ephesus, where we follow Anthia through the drudgery of daily life as an abused fisherman's wife. Caught between her fidelity to Artemis, fascination with Jesus, and fear of reprisal, Anthia and her readers experience the gravity of her dilemma: Will she risk everything to follow Jesus? I highly recommend this book, not only as a gripping page-turner but also as a powerful exegetical tool—rich with historical and cultural details that bring the Bible to life through the eyes of a first-century woman."

"With its captivating story and attention to detail, A Week in the Life of a Greco-Roman Woman paints the ancient world in vivid color. From the sounds in the public and private spaces to the smells of ancient bread and fish, readers will find themselves learning about the ancient world while immersed in a compelling story about a woman, her community, and her journey of faith. Whether for personal reading or as a course textbook, Holly Beers's story will leave a lasting impression on every reader!"

"Holly Beers does some important things in this enjoyable work of historical fiction. First, she makes me care about the characters at the center of the drama. Second, she provides an accessible introduction to the religious, economic, and social world of a Greco-Roman woman with all its difficulties and complexities. Finally, she demonstrates the ways in which those worlds would be upset and transformed through an encounter with the burgeoning Christian community. It's a great resource for anyone wanting to know about the experiences of women in the first years of the church's life."

"Holly Beers brings keen insights from the social world of the New Testament to her story of Anthia. Beers tells a captivating story of this Ephesian woman, whose life with her husband, son, and soon-to-deliver second child is one of subsistence living from their modest fishing business. The sidebars about life in first-century Ephesus complement the storyline. As Anthia encounters the early Christian movement (Paul, Priscilla, and Aquila), she is drawn into the way they share life and meals together across the fixed boundaries of social status. This book brims with information about life in Ephesus in the first century and shines a light on the experience of people in the Greco-Roman world and how they might have engaged the early church. Beers is a great storyteller and the book is hard to put down. I recommend it for anyone wanting to get a feel for first-century life as it was lived on the ground."

"A Week in the Life of a Greco-Roman Woman is a fantastic way to engage any student of the Bible with the real people, real places, and real challenges of the first-century church. Beers animates the story of Paul's impact at Ephesus by telling the tale through the eyes of young Anthia—a commoner's wife pregnant with her second child. The reader is drawn into Anthia's story from the very first page, and then—almost without noticing—educated in the realia of life for a woman in the Greco-Roman world. Not only do we walk away with an all-too-rare woman's lens on the impact of the Gospel on her world, we are left with a deeply personal testimony of the confrontation of Artemis's city with the Way of Jesus."

"Holly Beers has written a creative and engaging story of life in first-century Ephesus that presents background information helpful to understanding the New Testament material of that provenance. The plot line of her story suggests a way of understanding 1 Timothy 2:15 in its historical setting that all readers of the New Testament should consider. An educational and thought-provoking read!"

Holly Beers (PhD, London School of Theology) is associate professor of religious studies at Westmont College in Santa Barbara, California. She is the author of The Followers of Jesus as the Servant: Luke's Model from Isaiah for the Disciples in Luke-Acts.