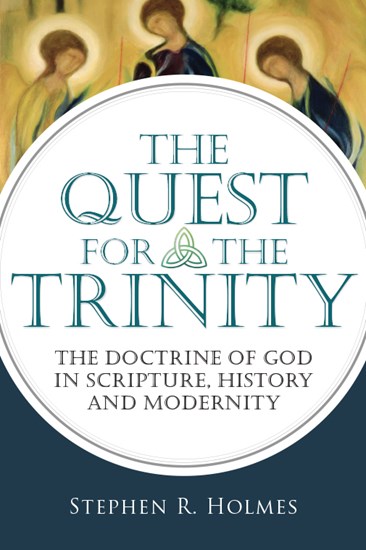 The Doctrine of God in Scripture, History and Modernity

The doctrine of the Trinity was settled in the fourth century, and maintained, with only very minor disagreement or development, by all strands of the church--Western and Eastern, Protestant and Catholic--until the modern period. In the twentieth century, there arose a sense that the doctrine had been neglected and stood in need of recovery.

In The Quest for the Trinity, Holmes takes us on a remarkable journey through 2,000 years of the Christian doctrine of God. We witness the church?s discovery of the Trinity from the biblical testimony, its crucial patristic developments, and medieval and Reformation continuity. We are also confronted with the questioning of traditional dogma during the Enlightenment, and asked to consider anew the character of the modern Trinitarian revival.

Holmes?s controversial conclusion is that the explosion of theological work in recent decades claiming to recapture the heart of Christian theology in fact deeply misunderstands and misappropriates the traditional doctrine of the Trinity. Yet his aim is constructive: to grasp the wisdom of the past and, ultimately, to bring a clearer understanding of the meaning of the present.

"Trinitarian theology has been a rallying cry for a particular constructive project in modern dogmatics. . . . In this volume, Holmes sets out a rather different account, one which tracks the tradition with greater care. This will in all likelihood be a healthy corrective to some enamored with an inflated or hypertrophied trinitarian theology."

"In this lively and engrossing book, Stephen Holmes charts the development of the doctrine of the Trinity . . . calling into question some established conventions about the history of trinitarian theology. This is a work of considerable theological intelligence and historical discrimination; it will enjoy a wide readership."

"It is rare to write something which can be both a textbook and a real intervention in a debate, but Steve Holmes has pulled it off. As a textbook for serious students, this is superb, covering the history of the doctrine in a way that is fresh, illuminating, concise and intelligent. I wish we had had it sooner."

"Stephen Holmes's book is brilliant in so many ways: provocative, timely, historically nuanced, theologically insightful, academically courageous and wonderfully sane. This book is must reading for all interested not only in the ongoing scholarly debate about trinitarian theology, but also for those concerned that their worship of the triune God echoes, in some meaningful ways, the voices of the saints throughout the ages."

"In summary, The Quest for the Trinity is a positive contribution to Trinitarian theology. . . . Ultimately, I hope it leads more people to a deeper Christian understanding of the doctrine of the Trinity—a central truth of the faith."

"What Holmes accomplishes is a challenge to much of current theology. He lays down this challenge clearly and with great documentation. In the course of his argument, Holmes makes admirably clear why even abstruse differences matter in how we live our lives of faith."

"The story that Holmes tells, a story of tradition lost not retrieved, is a sad account indeed, and accurate. It is hoped that in light of this narrative, evangelical theologians will return to the rich trinitarian tradition of the Cappadocians, Augustine and the Reformers. When evangelicals return to this tradition they will drink from wells they did not dig and eat from trees they did not plant. Most importantly, they will be returning the church to the heart of the Christian tradition, the trinitarian God who is revealed in Scripture."

"I recommend the reading of this book to those who want to understand not only the differences between the classical and modern renditions of the doctrine of the Trinity, but also to better understand the presuppositional differences behind such interpretations."

"By the end, Holmes offers readers both a survey and a critique. As a survey, it is a masterfully concise and nuanced exploration into the historical heart of Christian theology. As a critique, it is a timely challenge to prevailing historical narratives. . . . In academia, this text will serve as a valuable interlocutor for engaging contemporary trends, while also engendering substantial discussion among scholars, as it already has."

Abbreviations
Preface
Introduction
1. 'The history that God is': Studying the Doctrine of the Trinity in the Twenty-First Century
2. 'In your light, we see light': The Trinity in the Bible
3. 'Always with him are his Word and Wisdom': Early Patristic Developments in the Doctrine of the Trinity
4. 'From the ousia of the Father': The Fourth-Century Debates 1
5. 'The Godhead is by nature simple': The Fourth-Century Debates 2
6. 'Understood by a few saints and holy persons': The West and Augustine
Interlude: The Harvest of Patristic Trinitarianism
7. 'Distinction in the persons but unity in the nature': The Medieval Doctrine of the Trinity
8. 'By the testimonies of the Scriptures or by manifest reason': Anti-Trinitarianism from the Reformation to the Eighteenth Century
9. 'A transformation which will go back to its very beginning': The Doctrine of the Trinity since 1800
Bibliography of Works Cited
Index of Biblical Texts Cited
Index of Technical Terms/Phrases in Latin/Greek
General Index of Authors and Subjects

Stephen R. Holmes (PhD, King's College London) is senior lecturer in systematic theology at the University of St. Andrews, Scotland. His books include Listening to the Past: The Place of Tradition in Theology, and Christian Doctrine: A Reader, edited with Lindsey Hall and Murray Rae. Additionally, Holmes is editor of the International Journal of Systematic Theology, and he chairs the Theology and Public Policy Advisory Commission for the Evangelical Alliance UK.