As a publishing house, we desire to speak thoughtfully and in a balanced but bold manner into questions on the integration of faith, discipleship, and politics; on what constitutes the common good and building a just society—not only in election years, but every year. That mission is hopefully reflected in the titles we've gathered for our Books on Politics & Government page.

It's not an easy task for authors or publishers, but it's a vital exercise for a liberal democracy such as ours today.

My own political and spiritual awakenings happened at virtually the same time in the mid-1970s. Books played a significant role in both. By 1974, Watergate had forced Richard Nixon's resignation, which made way for Gerald Ford's brief ascent to the White House. Quickly on the heels of that came the nascent candidacy of a former peanut farmer from Plains, Georgia, in the 1976 U.S. presidential election.

The Christian publisher Word Books, then based in Waco, Texas (now a part of HarperCollinsChristian Publishing in Nashville), released an overtly supportive and lavishly illustrated campaign biography, The Search for Jimmy Carter by Tom Collins during that election year. Both it and The Miracle of Jimmy Carter by Howard Norton and Bob Slosser (Logos International, Plainfield, New Jersey) were premiered at the Christian Booksellers Association's (CBA) annual convention in the summer of 1976 in Atlantic City, New Jersey, of all places. The latter book would sell 600,000 units in its first month, become a New York Times bestseller, and signal fervent evangelical support of the former governor of Georgia.

After Carter's election, Broadman Press, the publishing arm of the Southern Baptist Convention (now known as LifeWay/B&H, also headquartered in Nashville), published a limited gift edition of his campaign autobiography Why Not the Best?, originally released in the summer of 1976 by Bantam Books as Carter appeared headed for the Democratic nomination for president. My copy of the Broadman Press book is numbered 3849 of 5000, stamped in gold foil on a back cover that is also festooned with an embossed image of the U.S. Capitol dome.

1976 was labeled by Newsweek as the "Year of the Evangelical," with Carter's victory and the eager publishing tied to it being Exhibit One of that reality. Four years later, Carter was out of office and the evangelical vote was labeled by many observers as a key difference between the 1976 and 1980 election cycles.

"Many evangelicals in the 1980 presidential election voted for Ronald W. Reagan over Jimmy Carter, even though President Carter was perceived at the time to be more evangelical in his theology and church participation than then-Governor Reagan," Francis Beckwith, a professor of philosophy and of church-state studies at Baylor University in Waco, writes in his book Politics for Christians: Statecraft as Soulcraft. "For Reagan's supporters, his policies and not his theology were decisive for them. Although at the time these evangelicals would have likely chosen Carter over Reagan to teach Sunday school, they preferred Reagan in the Oval Office because they believed that Reagan's policies best advanced the common good."

I fell short of voting age in the 1976 election, but proudly (as a relatively new believer) cast my vote in 1980 for the incumbent with the intent of keeping this explicitly evangelical leader in the White House.

It turns out, I was in the minority.

Carter lost in a landslide and returned to Plains with his wife Rosalynn and daughter Amy to pick up the pieces. I consulted more books to make sense of it all.

In a Newsweek article in 2006, reflecting on the outcomes of the 1980 election, journalist Jon Meacham wrote, "Three years after defeating Carter, President Reagan delivered a speech to the National Association of Evangelicals (NAE) in Orlando. The speechwriter's first draft was on the harsh side, and as Reagan edited the remarks, he added the following in his small, neat handwriting: 'The commandment given us is clear and simple—'Thou shalt love thy neighbor as thyself'."

Meacham acknowledged that the injunction is indeed clear, but it was not at all simple then, nor is it now. "How well we fulfill that injunction, believer or no, is perhaps the most consequential question of our time, or any time," Meacham wrote.

It was an interesting time to be forming notions of what constitutes Christian discipleship and faithful political engagement as a citizen. It was a divided, tense time in American society.

Seeking the Common Good as Christians

In his writing, Beckwith reminds us that the word "politics" is derived from the Greek word for city: "polis." As we engage ideas related to politics we are attempting "to understand 'the city,' the inner workings of a community and the way by which it governs itself over time." He goes on to state the we must concern ourselves with "what it means to be a citizen as well as whether the government under which these citizens live is just or unjust."

Do the Christian Scriptures have anything to say to us in this matter?

Both Carter and Reagan purported to believe they do, but they expressed it in very different ways in their domestic and foreign policies, and in their personal lives.

Beckwith also believes the Bible has something to say. In a chapter in Politics for Christians titled "Liberal Democracy and the Christian Citizen," he asserts there is a scriptural warrant for making the common good a standard for evaluating candidates and elected officials in office. He lists four broad areas to watch for:

"It seems clear that because Christians in a liberal democracy have the historically unique power to enact laws that advance the common good, they have a special obligation to take their citizenship seriously and use good judgment in voting and supporting legislation and political candidates," Beckwith writes. "This is not to say that Christians will always agree on the proper route by which the government ought to advance the common good. But there is no doubt that they have a biblical mandate to advance it."

In the fall of 1984, I was asked by a church in central Indiana to teach a course using the book The High Cost of Indifference, published that summer by Regal Books and edited by Richard Cizik, who was then a staff member of the NAE. The class was designed to consider the biblical mandate in response to a number of hot-button issues of the day, including abortion, religious liberty, nuclear war, crime, and the role of the media in public discourse, among other things. The book attempted to address the issues in an irenic, measured fashion but fostered combative responses from the church members who felt that it (and I) were not tethering to a sufficiently conservative point of view, at times.

I was thankful when, in 1992, a book by the theologian, philosopher and former Fuller Seminary President Richard Mouw, Uncommon Decency: Christian Civility in an Uncivil World, was released and became a touchstone regarding civil engagement in the public square.

It was particularly Mouw's chapter "Open Hearts: The Importance of Civil Attitudes" that provided reassuring guidance for opening ourselves to other people whose stories, perspectives, and values may be different from our own.

In his introduction to Athanasius's On the Incarnation, C.S. Lewis wrote, "It is a good rule, after reading a new book, never to allow yourself another new one till you have read an old one in between." Mouw's Uncommon Decency is one of the "old books" that I re-read annually as a reminder to maintain civility in what seems to be an increasingly uncivil time.

As he concluded his integrative work on politics and Christianity, Baylor University's Francis Beckwith wisely wrote, "Like so much of life on this side of eternity, politics must be put in perspective. It is not everything, but neither is it nothing. It has its place."

Growing up in the 60s and 70s in Indiana, my family would receive each day a copy of The Indianapolis News with 2 Corinthians 3:17 imprinted under its masthead: "Where the Spirit of the Lord is, there is liberty." It was a daily reminder of the integration of faith and care for "the polis."

Books are vehicles for promoting liberty, for shedding light on darkness. They help we, the citizens of our country, sort out issues related to this messy, fragmented, exercise we know as politics and faithful civic engagement. In a time when many of us are distracted by clickbait and popular opinion, books still have a tremendous impact. Here's to reading—widely, thoughtfully, carefully, deeply. 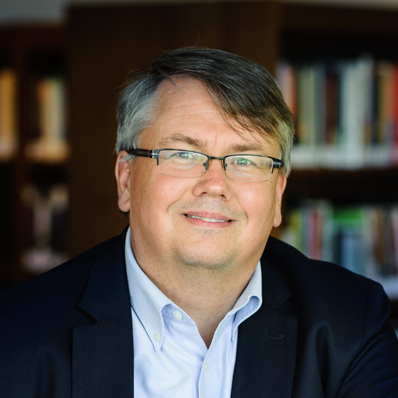 Jeff Crosby served as publisher of InterVarsity Press from 2016-2021 after more than twenty total years at IVP. He is now the president and CEO of the Evangelical Christian Publishers Association (ECPA). His writing has appeared in Conversations Journal, Books and Culture online, The Living Lutheran, Urban Faith, Crux, and many other journals and magazines. He is the editor and compiler of "Days of Grace Through the Year," a collection of meditations drawn from the writings of Lewis B. Smedes.