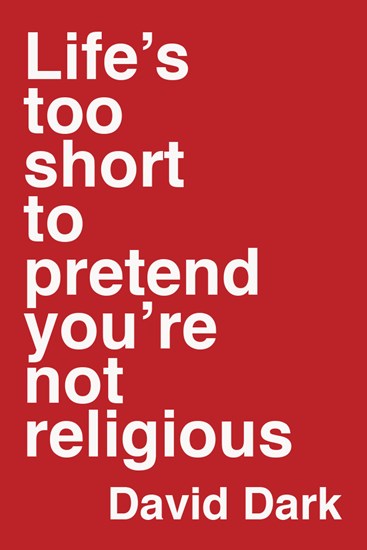 For many of us, the word "religious" immediately evokes thoughts of brainwashing, violence, and eye-rubbingly tiresome conversations. Why not be done with it? David Dark argues that it's not that simple.

The ease with which we put the label on others without applying it to ourselves is an evasion, a way of avoiding awareness of our own messy allegiances. Dark writes: "If what we believe is what we see is what we do is who we are, there's no getting away from religion."

Both incisive and entertaining, Life's Too Short to Pretend You're Not Religious combines Dark's keen powers of cultural observation with candor and wit. With equal parts memoir and analysis, Dark persuasively argues that the fact of religion is the fact of relationship. It's the shape our love takes, the lived witness of everything we're up to for better or worse, because witness knows no division.

Looking hard at our weird religious background (Dark maintains we all have one) can bring the actual content of our everyday existence—the good, the bad and the glaringly inconsistent—to fuller consciousness. By doing so, we can more practically envision an undivided life and reclaim the idea of being "religious."

"David Dark is one of our most astute and necessary cultural critics. His work gracefully opens new doors of understanding and breaks down barriers between secular and non-, and it puts a lot of old mythology out to pasture with a daring affirmation at the heart of his radical critique. Life's Too Short refreshingly ropes everyone in, insisting that we're all in it together. We forget that."

Jessica Hopper, author of The First Collection of Criticism by a Living Female Rock Critic

"Effectively skewering a central fallacy of the age, David Dark argues that at the deepest level no one is more or less religious than anyone else. With his premise granted, new avenues for ownership, responsibility and a renewed attentiveness to all we say, do and think arise. Life's Too Short to Pretend You're Not Religious is a call to consciousness and the compassion that accompanies the sacred insight that the whole world is kin and everything belongs."

"Brace yourself. Our bold conceits, wishful thinking and soothing sobriquets on the abolition of religion and the end of faith are set on a collision course thanks to David Dark's luminous reckonings with the real. The result is a shock of recognition: life more abundant awaits us only in the deep immersions of togetherness with others. Here alone are the comedy and chaos that define the human condition and lead us gently or not into the strange new world of grace. Life's Too Short to Pretend You're Not Religious is an irresistible triumph."

"Don't let an aversion toward that radioactive word dissuade you. Life's Too Short to Pretend You're Not Religious is a bracing manifesto for modern people and an optimism-infused love song to humanity. David Dark calls us to pay better, more generous attention to our own lives and the lives of others."

"Prepare to have idols smashed. David Dark renders futile the cherished modern ambition to opt out of human religiosity; religion, rather, is a road we can make by walking with open eyes and informed minds. No marvels of progress can save us from being heretics and holy fools, or prophets, seers and miracle workers. Dark helps us recognize these characters (and more) on the radio, in a dreary parking lot and within ourselves."

Nathan Schneider, columnist for America magazine, author of God in Proof and Thank You, Anarchy

"David Dark is one of the most important prophetic voices of our day. Life's Too Short to Pretend You're Not Religious is another beautiful demonstration of the winsome way in which he unsettles our language and our imagination. Not content to unravel the basic fabric of our existence, Dark reweaves the fibers into a rich and vibrant vision of the flourishing religious life for which we were created."

C. Christopher Smith, coauthor of Slow Church and founding editor of The Englewood Review of Books

"I am so very grateful for this book, which, among other things, demonstrates that answering 'Jedi' or 'Toni Morrison' when asked for your religious affiliation is a perfectly legitimate response to that question—thereby arguing us into another definition of what it means to be alive to wonder and mystery. And at a time in our culture when we seem to prefer our 'dialogues' to be conducted behind well-defended barricades from which we lob Twitter grenades, David Dark shows us that there could be another way to live with each other and speak with each other. Each sentence here is graced with a wisdom, humor and humility that can't help but inspire us to be a little less suspicious of each other and to hope a little bit more—and if that isn't a rare gift of prophecy, I don't know what is. Also, he writes like an unprintable word, and for that I am glad."

Carlene Bauer, author of Frances and Bernard and Not That Kind of Girl

"David Dark has a request for all of us. Stop thinking of being religious as passivity. Stop thinking of it as participation in something monolithic, intractable and stagnated by centuries of routine. In his new book, he asks us instead to find religion all around us: in music, television, books and film. In doing so, he reimagines being religious as a collective action open to all and demonstrates that in a time skeptical of religion, it can be a source of meaningful work and lifegiving pleasure and joy—and even of change."

"Having just finished David Dark's new book, I want to buy stock in Religion Unlimited, meaning that David helps us see why pronouncing religion dead or dying is terribly short-sighted. The writing is muscular yet graceful, and the content is wise and insightful. You couldn't ask more from a book . . . and you couldn't ask for a more important subject."

"Dark's work is a valuable resource for youth workers who are facing questions from students about agnosticism or are struggling to deal with apathy in today's youth culture."

"With candor and humor, (Dark) synthesizes a broad range of cultural voices alongside his own 'attention collection' of personal influences to create an argument against the thought that we can escape religion. . . . Through references to science fiction novels, Wendell Berry, Thomas Merton, and Daniel Berrigan, Dark sheds light on how thoughts are handed down to us, what we judge to be essential, and the ways in which we can begin to unlearn all that we have unwittingly inherited. Dark's argument couched in a memoir is a persuasive, well-grounded case for religion's place in modern society."

"While not a novel or sectarian position, it is refreshing that this approach comes from an avowed Christian. Anyone who wishes to get beyond the acrimony between believers and secularists will appreciate Dark's narrative, even if they wonder whether religion differentiates good from bad."

"In an age with 'religion' is often viewed as a dirty word, author and theologian David Dark wants to reclain the term. Through storytelling and accessible prose, Dark deconstructs negative connotations of religion as well as common assumptions about a divide between the secular and sacred."

"Dark has given us a book that is beautiful and timely, one that initiates a vital public conversation about the nature of religion and its benefits. I suspect many of those who identify as 'spiritual but not religious' would discover a winsome conversation partner, even if they do not agree with the way he defines all his terms. Because of its conversational nature, Life's Too Short to Pretend You're Not Religious begs to be read and discussed in churches, coffee shops, homes, and libraries across North America. . . . Dark has given us a compelling and meaningful understanding of how religion can lead to a more connected life of flourishing. And I'm not ashamed—indeed, I'm delighted—to wave that banner in the public square."

"[Dark] writes with humor and wit about our 'weird' religious backgrounds and our need to develop a 'language of love' based on sharing the things that are most important to us. Saying to someone 'I think you might like this' becomes a way of letting them know they have been seen, that we share common interests, and that we welcome their participation in something we hold sacred. Religion so handled is presented as a potent means of overcoming our isolation and building and sustaining community."

"Dark suggests that religion is the way people see themselves—who they are and what they do. Religion shapes people's thoughts and lives. Religion gets passed down from generation-to-generation through thoughts and stories. Dark shares personal stories from his own life to study our ideas of what religion is. He will open readers' minds to perhaps a new way of thinking about religion."

Introduction: Religion Happens
1. Crackers and Grape Juice
2. Attention Collection
3. Choose Your Ancestors Carefully
4. I Learned It by Watching You
5. Hurry Up and Matter!
6. The Web, the Net and the Verse
7. The Chother
8. Policy Is Liturgy Writ Large
9. Strange Negotiations
Acknowledgments
Notes

Download a complete press kit or talking points, an excerpt and author bio.

Is Belief in God Good, Bad or Irrelevant?

The Myth of the Non-Christian 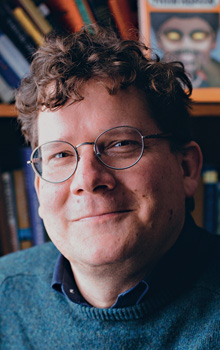 David Dark (PhD, Vanderbilt University) teaches in the College of Theology at Belmont University and among the incarcerated communities of Nashville, Tennessee. He is the author of The Sacredness of Questioning Everything, Everyday Apocalypse, and The Gospel According to America. He also contributed to the book Radiohead and Philosophy and has published articles in Pitchfork, Paste, Oxford American, Books and Culture, and Christian Century. A frequent speaker, David has appeared on C-SPAN's Book-TV and in the award-winning documentary Marketing the Message. He lives with his singer-songwriter wife, Sarah Masen, and their three children in Nashville.