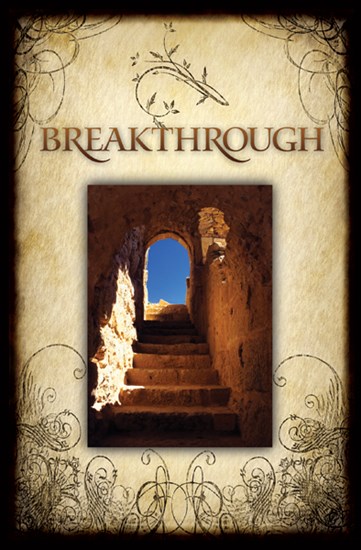 The Return of Hope to the Middle East

When was the last time you felt a sense of hope in regard to the Middle East? When was the last time you even heard some good news about the Middle East? Missionary Tom Doyle, who travels extensively throughout this key region of the world, finds much cause for hope. In fact, he observes that a spiritual breakthrough has come to the Middle East. A new generation of believers, passionate for God in spite of great challenges, including persecution, provides reason for genuine hope. Breakthrough was written to tell their story.

Doyle reports that in recent years amazing numbers of people in the Middle East—particularly Muslims but also individuals from Jewish or traditional Christian backgrounds—have come to Christ. While surveying how the Christian faith is blossoming in the Middle East, the heart of this book is its personal stories.

You'll read about Hamsa, who drove a tank in Saddam Hussein's army during the first Gulf War. Since then Hamsa has become a Christian and today he is a pastor in Baghdad. Rachel grew up in Jerusalem as an Orthodox Jew. At a low point in her life she met some messianic believers. Though it has cost Rachel her relationship with her family, she has embraced Jesus in her own life. Rachel also exercises a fruitful gift of hospitality, inviting both Jews and Arabs into her home for dinner and fellowship nearly every evening.

These stories and many more like them, will inform, inspire and challenge you to pray more effectively for the Muslim world in general and the Middle East in particular.

Tom Doyle pastored churches in Colorado, Texas, and New Mexico for a total of twenty years before becoming a missionary in the Middle East. His passion for Israel was fed through guiding tours there, eventually becoming a tour guide for the State of Israel. Tom also serves as the Middle East director for e3 Partners, a global church planting ministry. He is author of Two Nations Under God. He and his wife, JoAnn, have six children and two grandchildren.