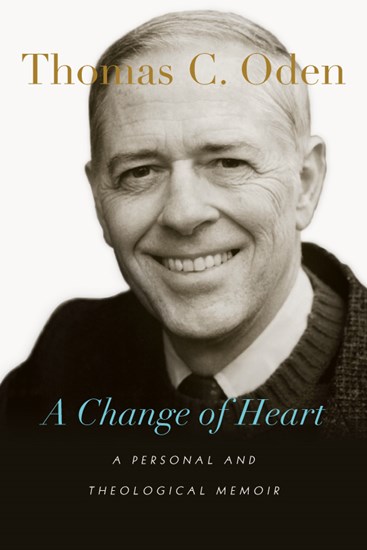 How did one of the twentieth century's most celebrated liberals have such a dramatic change of heart?

After growing up in the heart of rural Methodism in Oklahoma, Thomas Oden found Marx, Nietzsche and Freud storming into his imagination. He joined the post-World War II pacifist movement and became enamored with every aspect of the 1950s' ecumenical Student Christian Movement. Ten years before America's entry into the Vietnam war he admired Ho Chi Min as an agrarian patriot. For Oden, every turn was a left turn.

At Yale he earned his PhD under H. Richard Niebuhr and later met with some of the most formidable minds of the era—enjoying conversations with Gadamer, Bultmann and Pannenberg as well as a lengthy discussion with Karl Barth at a makeshift office in his hospital room. While traveling with his family through Turkey, Syria and Israel, he attended Vatican II as an observer and got his first taste of ancient Christianity. And slowly, he stopped making left turns.

Oden's enthusiasms for pacifism, ecumenism and the interface between theology and psychotherapy were ambushed by varied shapes of reality. Yet it was a challenge from a Jewish scholar, his friend and mentor Will Herberg, that precipitated his most dramatic turn—back to the great minds of ancient Christianity. Later a meeting with then Cardinal Joseph Ratzinger (later Benedict XVI) planted the seeds for what became Oden's highly influential Ancient Christian Commentary on Scripture. This fascinating memoir walks us through not only his personal history but some of the most memorable chapters in twentieth-century theology.

"Tom Oden's A Change of Heart chronicles his own odyssey through modernity back home to the fathers he never knew—until he read them, prayed with them and learned the riches of the timeless faith at their feet. This book invites readers to join him in this odyssey. As one who has been privileged to travel the last part with him, I can truly say they will not be disappointed in the journey Tom Oden is inviting them to undertake with him."

"In this memoir Tom Oden explores his theological career with specific reference to his transition from Christian liberalism to evangelical Christianity. In the process he describes the many theological issues that dominated his era, focusing on the World Council of Churches as a lightning rod. Oden's view that theology should not be at the whim of every passing fashion, or that current affairs should not be the litmus test, deserves careful consideration even by those who disagree with him. Oden offers a touching description of the passing of his wife after a bout with cancer. The book is a record of an important theological voice of his generation, one that brings to focus the wide-ranging religious influences of the day."

"A Change of Heart takes readers where Thomas Oden has been, bringing them into a conversation with some of the seminal theological minds of the 20th century and walking them through the tumultuous decades of Thomas Oden's lifespan. By any measure, these have been some of the most consequential and controversial in the history of the Christian church. More than anything else, this book will help every preacher come to a deeper understanding of what it means to embrace biblical Christianity despite facing a highly secularized age."

". . . I would yet close by stating once again what a delightful and insightful book this is. It is a powerful analysis of a broader phenomenon: the movement from the political left to the right, and from an infatuation with novelty to an appreciation of tradition. . . . Unusual for an autobiography, this is not an exercise in ego but rather the testimony of a remarkably talented and yet touchingly humble man. Oden has lived an extraordinary life at the very center of the revival of church interest in both patristic thought and what he so helpfully characterizes as paleo-orthodoxy."

"Oden provides an engaging account of his life, decade by decade, from the 1930s into the 2010s, as he moves from rural Oklahoma to Dallas and then east to Yale University and Drew University before ultimately returning to Altus, OK. . . . This thoughtful reflection will engage a wide variety of readers and will help promote not only the broadest ecumenical Christianity but also interfaith cooperation."

"Oden's Memoir should be a preferred read for anyone interested in twentieth- and twenty-first-century historical and systematic theology, especially as such work has played out in the halls of modernity, evangelicalism, and ecumenical trends, especially in the context of the unfolding exchanges between Roman Catholicism, Eastern Orthodoxy, and Evangelical Protestantism."

"This book is for anyone seeking inspiration or encouragement in the face of the challenges of modernity, to press on in faithfulness to the gospel which was once for all handed down to the saints."

"Over the last 60 years or so, few United Methodist theologians have been as influential as Thomas C. Oden. His pioneering work in pastor theology, pastoral care and counseling, patristic exegesis, Wesley studies, and systematic theology have a profound influence on at least two generations of scholars and clergy. . . . Oden's latest work, A Change of Heart, is a personal and theological memoir. In keeping with that genre, the goal of this work is simply to tell the story of a life lived. . . . People from across theological and political spectrums will find in its pages a loving and generous guide eager to take them on a journey that is as much about repentance as it is conviction or certitude. . . . [W]hile I have read many of Oden's works over the years, we have never personally met one another. After reading this latest work, there is a real sense in which I feel like we have met. Even better, I feel like I have made a new friend. And isn't that what a good memoir should do?"

"This work of Oden’s is a deeply reflective personal and theological memoir. It is simply a story of a life lived; it is profound because of the type of person who lived it."